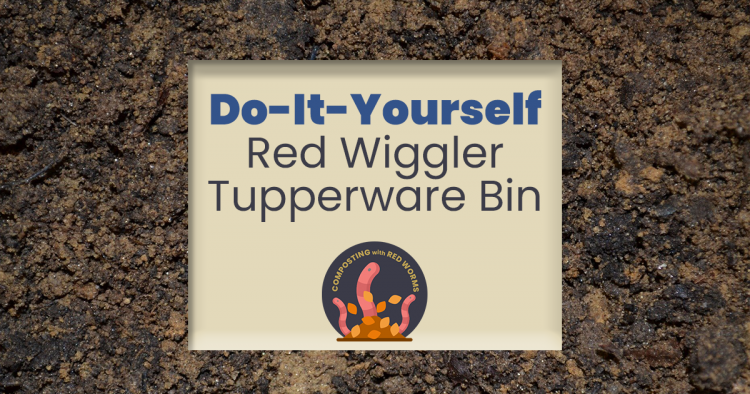 One of the easiest ways to get started is by building a DIY Red Wiggler Tupperware Bin. Many individuals have a large storage container around their home or apartment, often storing holiday decorations. They are perfect contenders for providing a home for your red worm population.

Tupperware containers are suitable for vermicomposting because:

Upcycling your Tupperware bin can be a quick and cheap option for beginner worm composters. However, there are some downsides to using worm composting. After several months the bin will increase in weight, and it is not the most straightforward design for collecting compost. Collecting compost from a bin like this is often time-consuming and cumbersome.

How to create your own DIY red wiggler Tupperware bin

Today we are going to review Great Escape Farms Youtube tutorial on how to build your own DIY red wiggler Tupperware bin. Overall, This is a great resource to get started vermicomposting. One of the unique things about their method is that they nest one container in another. The nested container contains holes to allow for any excess liquid to escape

It is important to note that you do not need to use two bins to get started. With proper bedding and the correct feeding schedule, you can keep your bin at the ideal moisture level. The correct moisture level is similar to that of a wrung-out sponge.

Around minute 1:20, the maker states they will rotate the bins and let one ‘bake’ while feeding the items to the other bins. While we can not know exactly what the creator meant, we do want to add a note of caution.

A common beginner mistake is overfeeding your worms. Feeding your worms too much is a problem because it can cause anaerobic decomposition and increase the temperature of your bin. You want to avoid allowing the bedding to get above 84 degrees. Especially if your worms can not avoid the hot spot, for example, if you overfeed in a small pocket of your bin, your worms may be able to escape the heat on the other side of the bin or on the walls of the bin.

Give red worms plenty of air.

Red worms, unlike earthworms, live in decaying plant matter and near the top six to twelve inches of soil. Earthworms and other worm species prefer to live deep, sometimes feet, in the dirt. This means they are used to getting a lot of air. In fact, worms breathe through their skin. This means the soil needs to be moist but not saturated.

We would suggest that you follow this tutorial to add 2-3 times the holes this creator used. It is common to actually cut a square in the center of the lid for additional airflow. Simply add a screen with staples or silicone mesh to keep pests out, and you can help the worms moderate their moisture and airflow.

Feed only what can be eaten in a week

There are a lot of great suggestions here about the types of things to add to your compost bin. The brown matter and plant matter are excellent suggestions. The strategy used in this video is more of a layered approach instead of a pocket-feeding approach.

We feel that there is a lot of food going in the bin to start off. It isn’t to say that this is bad, but just something to be monitored. A red worm’s preferred bedding temperature is somewhere around 50º-70º Farenheight. You should set up your bin a few days to a week prior to your worms arriving.

This will give you a chance to prevent anaerobic decomposition from increasing the heat in your bin. If a bin’s heat rises into the high 80ºs or 90ºs, your worm population may perish or flee to the sides of the bin to escape. In a layered strategy, it is difficult for worms to avoid the hot spots, as the entire layer or bin could be affected.

The best PH balance for your worms

While their ideal temperature is somewhere in the ’50s-’70s, their ideal pH is around 7.0. 7 is the same pH as pure water. Worms can also tolerate pH levels from 4.2 – 8 or higher. Items like tomatoes have a pH level of 4 and should be given in moderation. Citrus and any items with vinegar should be avoided altogether. They can have a pH level of 2 or 3.

On the opposite side of the spectrum, you can give them more items like leafy greens, which tend to carry a pH level of 7 or low 8. In general, worms tolerate most fruit and vegetable scraps well. You can add limestone (not hydrated lime) that can be added to correct or maintain your DIY Red Wiggler Tupperware Bin’s pH level.

We love seeing worms get established in their new home. It’s nice to see what it looks like to get the items in the mail and the care instructions upon arrival. Don’t overlook the step to saturate the worms in the travel container. Worms dry out when they are mailed by air. Your first step should be to add some nice pure water to rehydrate the beddings and the red worms themselves.

You can see in the video that there is plenty of water beading up on the sides of the Tupperware bin. In most situations, once you place the lid on the bin, the worms will burrow into the bedding, seeing moisture and nutrients. If they are especially dry, they may go directly to the sides of the bin to absorb the condensed water.

If, after you’ve just added your worms, open the lid to find them clinging to the side, it’s okay. Check the water levels, temperature, and pH, and if everything’s okay, just leave the lid off the bin. It is common for them to get disoriented in a new bin. By leaving off the lid, your worms will avoid the light and will seek out the bedding. Once they go into the bedding, you can simply return the lid.

Overall, Great Escape Farm made an excellent video for any beginner to follow. The nesting bin design makes it easier to maintain a good moisture level for your worms. They also give you some great ideas on different food and grit items to help your worms break down food matter. We’ve added some of our suggestions that you can take or leave. Remember, there is no 100% right way to worm compost. It’s just a lot of trial and error.